The store will not work correctly in the case when cookies are disabled.
Menu
Account
Settings
Select Store

A Promise of Hope

Be the first to review this product

The astonishing true story of a woman afflicted with bipolar disorder and the miraculous treatment that cured her. Author: Autumn Stringam, Publisher: HarperCollins Canada, September 2007

Skip to the end of the images gallery 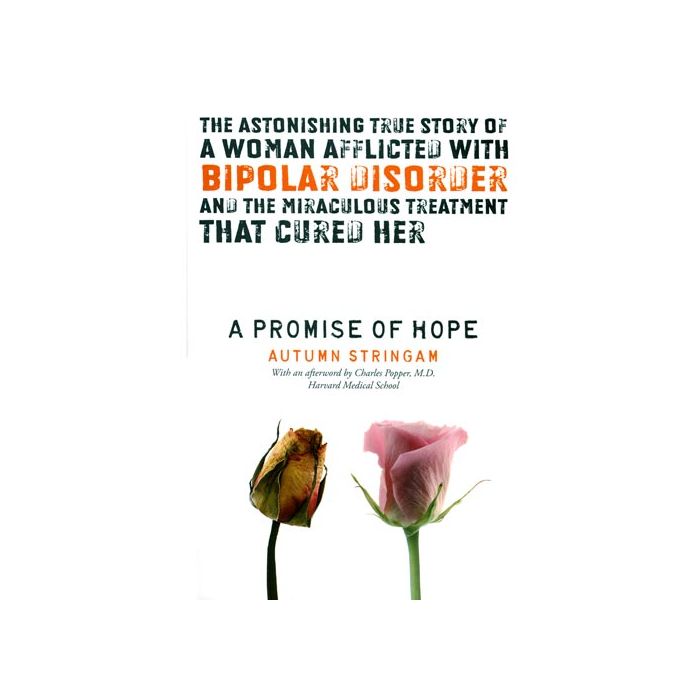 Skip to the beginning of the images gallery
Details

About the book:
A Promise of Hope author, Autumn Stringam, suffered from bipolar disorder for years, and after the suicides of her grandfather and mother, expected that the disease would also take her life. Then her father found the miracle that saved her.

A Promise of Hope is the personal story of Autumn's flight from madness to wellness, all due to the vitamin and mineral supplement that works on the premise that many forms of mental illness are caused by nutritional deficiencies. An honest book that exposes the hidden torment of bipolar disorder, it is the story of a daughter seeking to forgive her mother. A Promise of Hope is also an astonishing scientific account that moves from a kitchen table in Alberta to the treatment offices of a distinguished Harvard psychiatrist and into the labs of a skeptical medical establishment. It climaxes in a bitter--but eventually triumphant--battle with Health Canada, in which the tiny micronutrient treatment company is exonerated and praised for saving the lives of thousands of Canadians previously thought lost to mental illness. More than anything, A Promise of Hope is a powerful story and a call for a new understanding of the causes of mental illness and its treatments.

“A rare and deeply true look at the patient’s side of…‘mental illness,’ complete with a road map for hope.”
—Estelle Toby Goldstein, MD, Psychopharmacologist and Psychiatrist, Diplomate of the American Board of Psychiatry and Neurology

A Promise of Hope is quickly becoming a best seller. Order your copy today and find out why.

Reviews
No reviews yet ... Have an opinion? Help others decide. Share your knowledge about this product by submitting a review.
We found other products you might like!
*These statements have not been evaluated by the Food and Drug Administration. These products are not intended to diagnose, treat, cure, or prevent any disease.
Copyright © 2023 Truehope Nutritional Support Ltd.